Featured image: King of Cups collage that I created for Vibecamp Tarot, a project under the purview of @augurydefier. I don't know when the full deck will be available but I expect it'll be a banger from top to bottom.

The card shows the ability to restrain one's emotions and be fully in charge of your feelings and impulses. Therefore, the King of Cups represents a balance between the intellect and emotions. [...] You first need to temper the state of your emotions, so that you can progress forward in reality.

One must imagine Sisyphus self-possessed...

It's only been a month since last Ideograph (the customary gap) but I have a bazillion things to tell you. "Bazillion" meaning, like, "four."

First off, I got covid! At long last Miss Rona reached me. This news would be irrelevant except that it impacts Sonya Supposedly members: I can't visit the local copy shop to print happy mail, so your monthly missive will be later than usual. On the bright side, I expect to recover by next week, since my symptoms are fairly mild.

Longtime members know that happy mail is always slightly late, and not always just slightly 😭 I swear, nothing has increased my admiration for small businesses that have their shit together more than my own continual failure to run a punctual side hustle. Seems like bad advertising to admit that... thank goodness for my day job? Lol.

Speaking of bad advertising, here's the rundown of projects on deck:

Regarding that last bullet point: I've been messing around with music a lot in 2022, writing lyrics and melodies, researching music production, even recording vocals. My dad is letting me use his nice microphone!

I was scared that I would need to learn how to mix and master. After preliminary exploration, I'm confident that I can lean on collaboration instead (which will be good practice anyway since playing nicely with others is not my strong suit). I'm acquainted with more producers than I initially realized, plus /r/WeAreTheMusicMakers, /r/makinghiphop, and /r/mixingmastering contain plenty of people with skillsets that complement mine.

Even as a very young child, I know I'm not good. I dream dark and dirty thoughts. I play in the dirt, making mud pies, smelling of earth and sweat. I am bossy and demanding (when my parents aren't looking). I skulk around the house and tape record my aunts playing cards and drinking, delighting in the transgressions I witness when they think I'm not there. I fight with my sisters, loud and mean, until I'm put in timeout in the pantry. I sit on a stool and wonder why I can't be nicer.

That's all for now, talk soon. 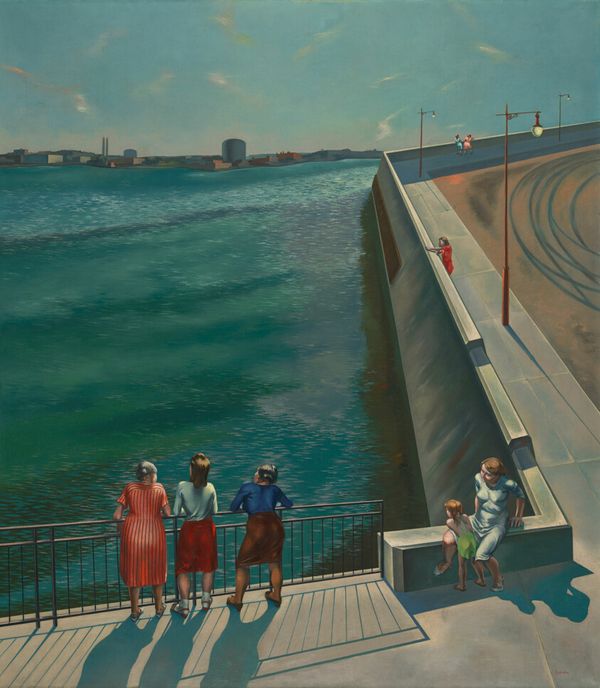 Hi. There's a giveaway in this newsletter, find instructions at the end.Featured art: The River by O. Louis Guglielmi (1942), encountered via Twitter bot.Members may have missed:Eureka!